Commander Vic Hoskins is the main antagonist of the 2015 blockbuster film Jurassic World. He is the tyrannical CEO of InGen Security Division, who seeks control on Masrani's dinosaurs.

He is potrayed by Vincent D'onofrio, who also potrayed Kingpin.

He is the tyrrannical and heavily corrupt CEO and leader of InGen Security Division, and is the creator of the Indominus who seeks control on many other dinosaurs. During Isla Nublar incident 2015, he has committed man slaughter on CEO Simon Masrani, only to be suspected and gain control on his dinosaurs.

He worked in cooperation with Simon Masrani, CEO of Masrani Global Cooperation. He intended to sell his ideas to military companies all over the world, carless of harm he intended to make.

Right at the beggining of the film Jurassic World, he talked to Owen about his plan to use prehistoric instincts to fight for him the wars, so he can sell them for money. He later sought the opportunity to kill Masrani, and took his helicopter instructor, thus sending him on his copter to hunt the Indominus, and getting him killed. He then took over his company, and took responsibility to his park and animals, as he wanted. He relieved all workers, and hired a new team on his ground, thus converting InGen to Masrani Global Cooperation. Then, he drove a helicopter with soldiers, and was on the "mission" to bomb the pteranodons. However, his workers let one of them in the door, in Hoskins' attempt to cause evacuation, so he will be able to fieldtest dinosaurs. Claire and Owen then argue with him about it, but he says it is going to happen with or without them. Then, he sends the soldiers and the raptors to hunt and enslave the Indominus, as he records the battle with his idea to get money. However, the indominus hypnotizes the raptors, and many of his soldiers get killed from that incident. He then tricks Henry Wu into getting fired, by ordering him to take the assets into a safe place, as it was really just to fire Henry Wu for doing the wrong thing, so he can take control of the assets and the lab. Then, he revealed his plans to take control of the dinosaurs infront of Claire, Owen, Gray and Zach, and he attempted to kill them. However, a raptor came in, and he tried to get the raptor to kill Owen, Claire and the children, instead of him, and he even managed to get the dinosaur's attention, due to hypnosis. However, the program did not work completley as the raptor bit him anyway. Near the end, it was revealed he put a chip on the raptors, which led them to obay and understand orders of hypnosis.

Evil, scheming and egoistic, as he only cares about money and fame. He plotted to kill Masrani during the film, by sending him on a hellicopter without an instructor, thus hoping to gain from it control on the park, and on his dinosaurs. He also seems to manipulate Owen into controlling the raptors. 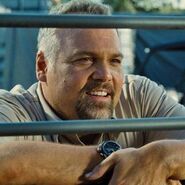 Add a photo to this gallery
Retrieved from "https://villains-antagonists.fandom.com/wiki/Commander_Vic_Hoskins?oldid=172"
Community content is available under CC-BY-SA unless otherwise noted.